LGBTQ+ diversity and inclusion in the workplace

As February marks LGBTQ+ History Month, we wanted to delve a little deeper into LGBTQ+ diversity in the workplace, specifically in tech, and think about what we can do to support this movement, both as a business and as individuals.

Before we leap ahead, it’s important to take a look at the history of LGBTQ+ equality and learn how things have progressed up until now.

While LGBTQ+ History Month began in the US in 1994, it wasn’t formally recognised in the UK for another 11 years. In 2005, two educators and activists organised a programme as part of a Schools Out UK project to educate young people about the issue's members of the LGBTQ+ community face. Their goal was, and still is, to help schools feel more inclusive, regardless of gender identity or sexual orientation.

They held this event in February to mark the 2003 abolition of Section 28 of the 1988 Local Government Act. This legislation, introduced by Margaret Thatcher's Conservative government, stated that local authorities were not allowed to "intentionally promote homosexuality or publish material with the intention of promoting homosexuality". This meant that schools were effectively gagged on this issue, as they weren't permitted to educate children on anything LGBTQ+.

In researching this piece, we came across Stonewall, which campaigns for the equality of lesbian, gay, bi and trans people across Britain. Their website is a fountain of information and includes a fantastic key date timeline. We highly recommend taking the time to read through it to learn more about LGBTQ+ history.

LGBTQ+ equality in the workplace 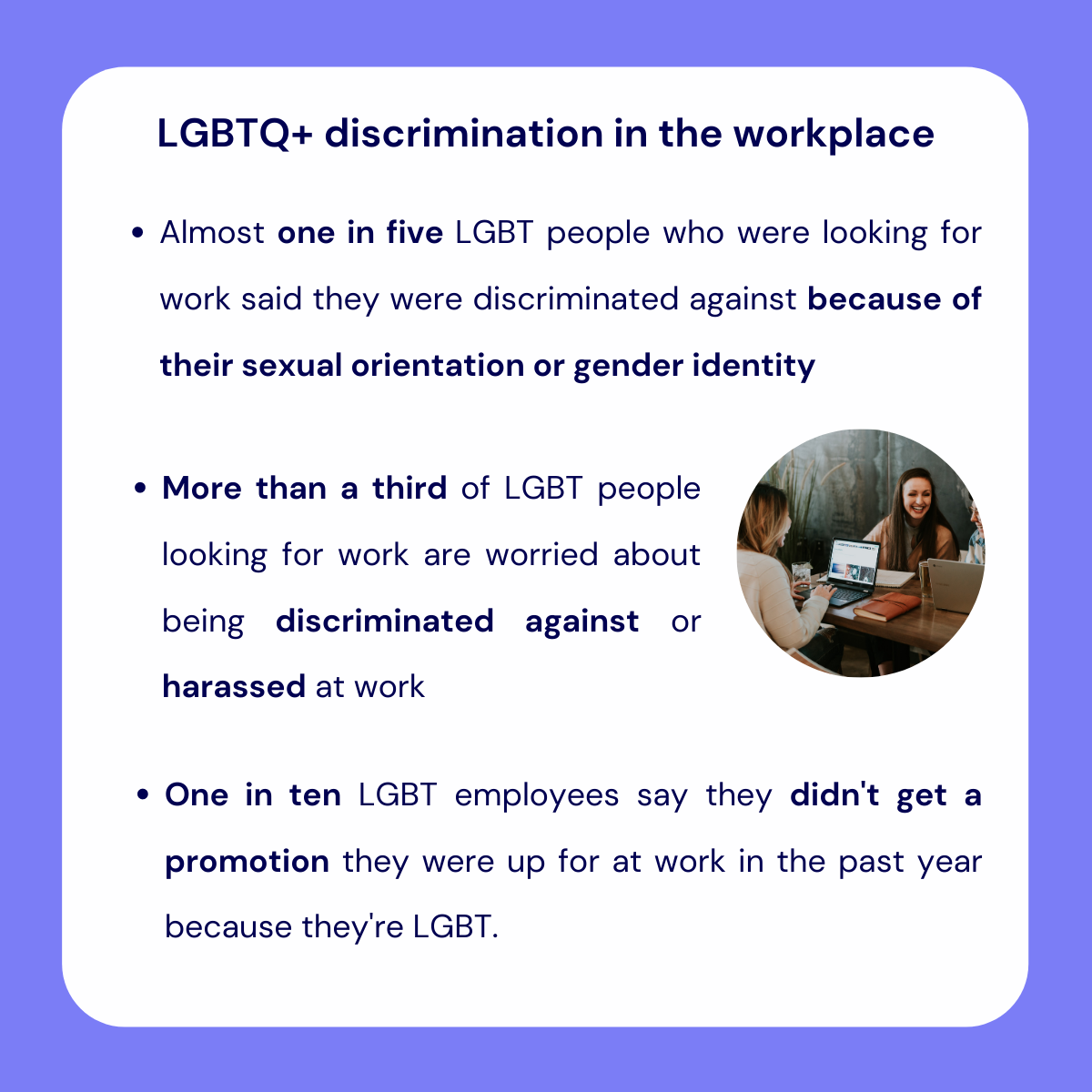 This final number rises to 24 per cent of trans people, compared to seven per cent of LGBQ+ people who aren’t trans. Black, Asian and minority ethnic LGBTQ+ staff are also more likely to not receive a promotion, as are LGBTQ+ disabled people, 19 per cent and 16 per cent respectively

In the report, Henry (24) describes his experience with job interviews:

‘Applying for jobs goes smoothly when they read my name and assume I'm cis, but during interviews things clearly change because I'm not cis-passing and my legal documents (passport, birth certificate, driving licence) are in my birth name due to not having the money to update them. The attitude of the employer always changes when they realise I'm trans.’ 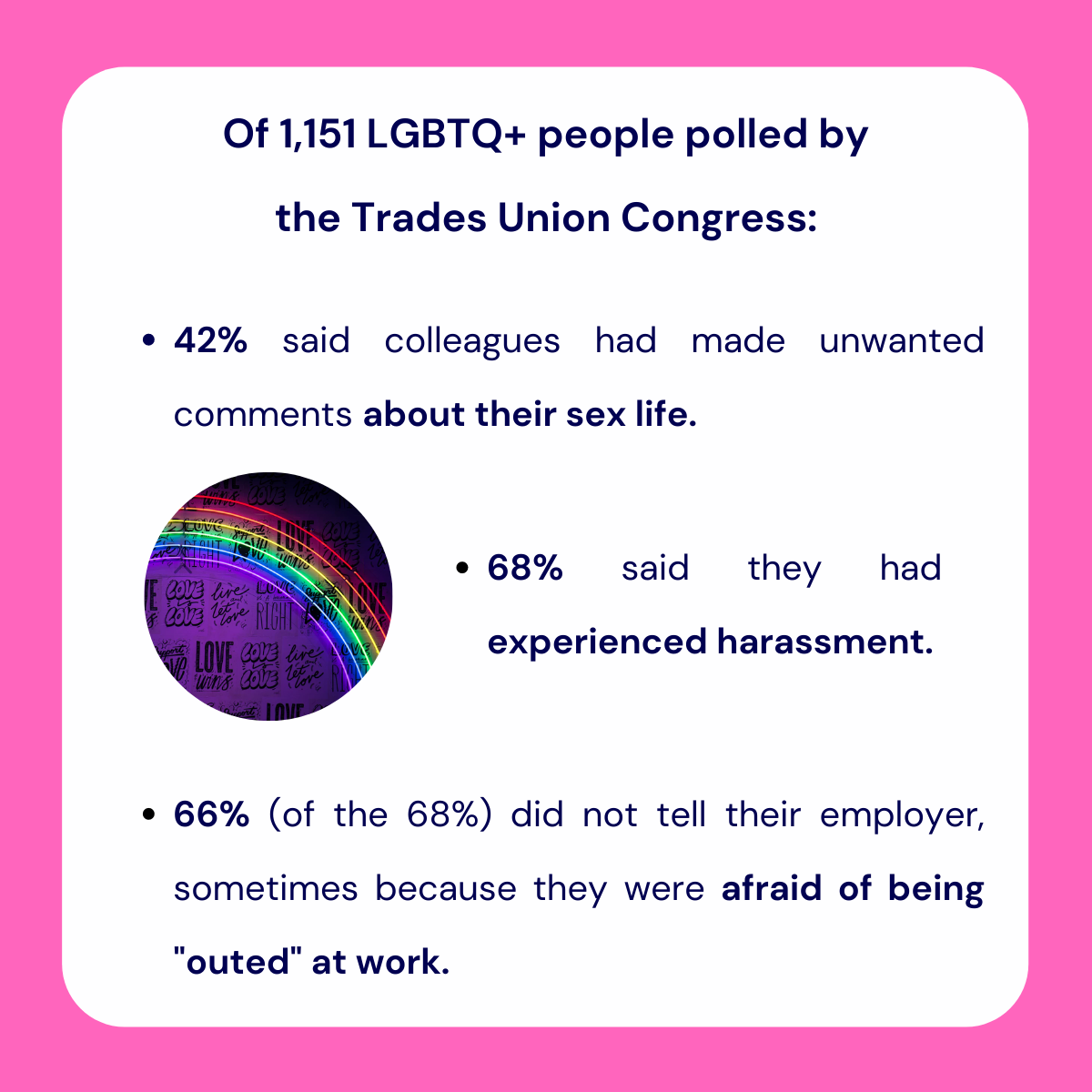 According to Inclusive Board’s report on LGBTQ+ inclusion in the technology industry, ‘30% of LGBTQ+ young people in the UK would not consider a career in science or technology due to the fear of discrimination.’

While 2019 saw some major technology companies announce their commitment to the LGBTQ+ community, such as Facebook and Deliveroo, more action is required to improve LGBTQ+ inclusion in tech. Not for profit organisations, such as Out in Tech, Lesbians Who Tech and LGBTQ Tech Advocates have emerged to promote LGBTQ+ representation in the industry.

As Inclusive Boards astutely put it, ‘there is no quick fix for improving the LGBTQ+ image problem in the sector’. Partnering with not for profits, widening your community and setting up LGBTQ+ networks is a good place to start. The most important thing is to promote a welcoming, inclusive culture within your organisation and encourage others to do the same. Loudly.

What can Confido do to support the LGBTQ+ community?

There’s clearly much more that needs to be done to stop this kind of discrimination, and we can all play our part by being better allies. While some big British businesses have excellent programmes in place that we can learn from, such as Barclays’ Spectrum Allies, what can we do as a tech recruiter?

Improving diversity across the board is something we pride ourselves on at Confido. When partnering with startups, we work closely with the leadership teams to map current state VS future state in terms of diversity. We care about making these exciting startups accessible to all and helping their voices be heard within the tech industry.

As a team, we're dedicated to working with and listening to from people from all walks of life, so we can continue to learn, grow and be better allies.

What can we do as individuals to support the LGBTQ+ community?

It’s up to every single individual to make a difference where they can. But what can we do to help?

3 ways support the LGBTQ+ community and be a better ally:

Take the time to educate yourself

Talk to people and learn about their experiences

Stonewall have some amazing resources on their website as part of their ‘Come out for LGBT’ campaign that can help with all of the above. Out and Equal, an organisation dedicated to achieving workplaces of equality and belonging, also have a wealth of resources on supporting LGBTQ+ employees and leaders.

Getting Curious With Jonathan Van Ness

Gay and a Non Gay

The Gay Revolution: The Story of the Struggle

And the Band Played On: Politics, People, and the AIDS Epidemic

Love Wins: The Lovers and Lawyers Who Fought the Landmark Case for Marriage Equality

How to Survive a Plague: The Story of How Activists and Scientists Tamed AIDS

When We Rise: My Life in the Movement

Please do share any other resources you have with us, we'd love to hear from you.