🌎💛 Find the best jobs in sustainability, social impact and more at Jobs for Good >

At the end of 2019, which I think we’ll all agree feels at least five years ago, big things were on the horizon for Tech for Good. 2020 was set to be a bumper year for purpose-driven startups, with increased investment interest and many businesses set on improving their sustainability.

Then COVID happened, and all predictions of any kind went out the window.

So, we wanted to find out what really did happen for Tech for Good in 2020. Did purpose-driven startups see any major growth, and (more importantly) what impact did they have?

Let’s start with the financials. Thankfully, ‘The COVID-19 pandemic has not slowed investment activity’, a recent PWC report states. In fact, a growing number of European entrepreneurs and investors are responding to the climate crisis, with over €11b invested into European impact startups over 2019 – 2020.

PWC go as far as to say call sustainability ‘the new disruptor for the consumer goods segment’, as consumers are expecting and demanding more accountability from businesses. 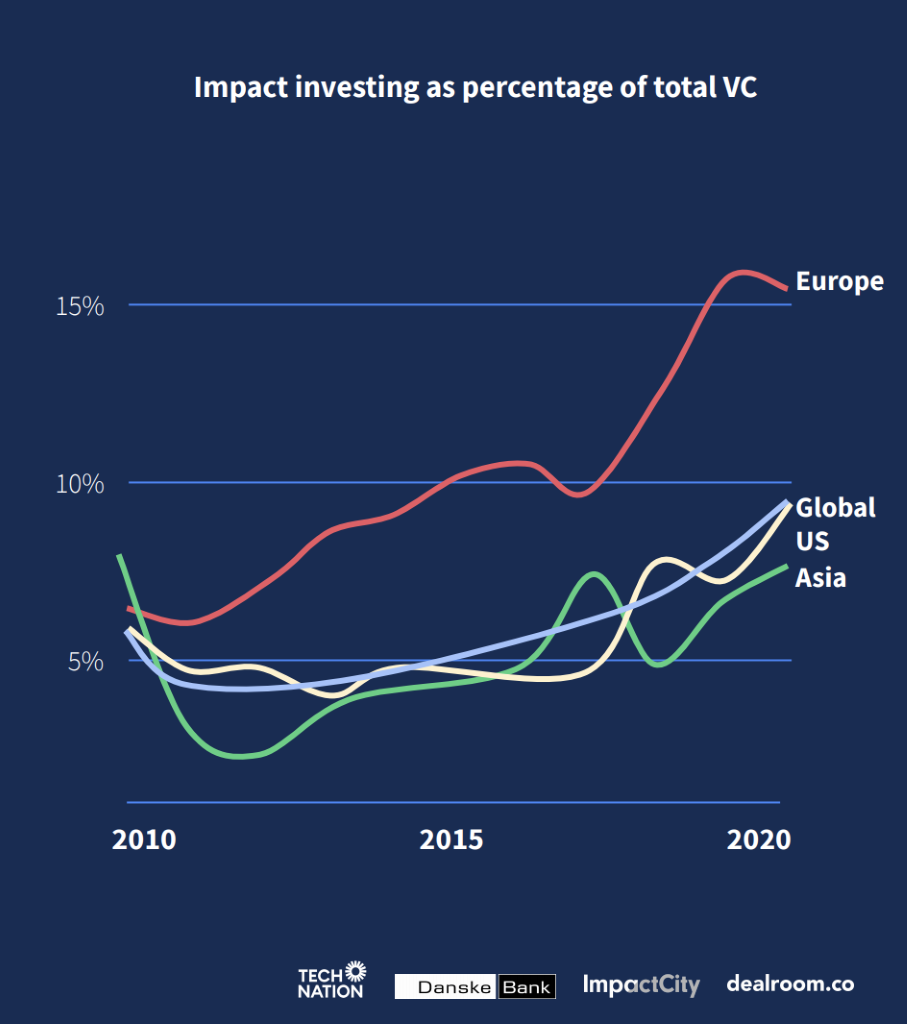 So, it’s good news on the investment front, but what did these businesses achieve during such a turbulent year?

Here’s just a small snippet of the impact these fantastic organisations have made...

The impact on green technology

One big positive that we can take from last year is that for the first time ever, renewable power overtook fossil fuels. In the first half of the year, 40% of Europe’s electricity came from wind, solar, hydro and bioenergy, with fossil fuels contributing just 34%. The UK actually went coal-free for over two months straight. It marks the longest coal-free period since the industrial revolution.

Octopus Energy also celebrated a huge milestone in 2020, as they reached unicorn status thanks to investment from Origin. They continue to lead the green energy charge, having been recently crowned a double unicorn after teaming up with Tokyo Gas. Greg Jackson, Octopus Energy's Founder and CEO, said the investment would “turbocharge our mission to revolutionise energy globally”.

Elsewhere in greentech, Ocean Bottle made waves by collecting 1,139,949 kgs of ocean-bound plastic. That’s the equivalent of 100,277,000 plastic bottles, which would stretch 1.57 times the diameter of the planet! The B Corp supports the communities that collect the plastic by exchanging it for money, or credit to spend on tuition, products, health care and access to micro-finance. Read their full 2020 impact report here.

The impact on charities

While Beam has changed the lives of over 400 homeless people since founding in 2017, 2020 saw them make a greater impact than ever before. Last year, the team launched their Fund a Future campaign which aimed to get homeless people into key worker positions. Since March 2020, the company said it had helped 122 people gain employment, with 88 of these working in crucial industries.

‘It’s inspiring to see so many homeless people taking on important roles during the pandemic,’ Beam’s founder Alex Stephany told the Big Issue. ‘Many of the people we’ve supported have been hit hard by COVID-19 so it’s amazing to bring them hope and stability during these difficult times.’

Learn more about the work that Beam is doing, here.

The impact on mental health

The Centre for Mental Health predicts that up to 10 million people (almost 20% of the population) will need either new or additional mental health support as a direct consequence of the crisis.

Startups like Unmind have been doing their bit to support people through these tough times. As well as producing a number of guides and expert webinars, Unmind have been busy doing what they do best – helping build mentally healthier workplaces.

With most offices remaining closed for the foreseeable future, ensuring employees have access to support is more important than ever before. In November 2020, Nationwide launched a winter wellbeing campaign with Unmind, dedicated to making meaningful human connections, and empowering employees to give themselves space and recharge.

Carmen Geeleher, a Nationwide Personal Banking Manager, explained how the scheme has helped her: "When faced with such unusual times, it’s been a great tool that I can delve into at any time when I need extra support, or a different perspective when things might not be going as well as they usually do. Unmind has helped me to help myself, which means I can help others to do the same."

The impact on food waste

Globally, a third of all food produced is wasted. In the UK alone, £15b of edible produce is binned every year. With record demands in 2020, supermarkets have been criticised for wasting food in their supply chain that could have been diverted to food banks. That’s where Olio steps in.

Having already rescued over nine million portions of food, food sharing app Olio announced a new partnership with Tesco in September 2020. Tesco is rolling out the scheme to all 2,700 branches of its UK branches, enlisting the help of Olio’s 8,000-plus local volunteers who will visit Tesco stores to collect surplus food nearing its sell-by date.

They will then share the items with people in their local area through the Olio app. It’s a win-win; reduced food wastage and more meals on plates, for free! Olio and Tesco trialled the scheme earlier in 2020. Across 250 stores, 36 tonnes of food was redistributed in six months. Half of all food listings on the app were requested within an hour of being uploaded.

The impact on edtech and online learning

With schools forced to close for a large portion of last year, online learning has been vital for millions of homes across the UK. Education specialists like Third Space Learning have been on hand to bridge the gap and make the transition as smooth as possible.

Kevin Presneill, Deputy Headteacher of Brompton-Westbrook Primary School, explains how Third Space Learning has helped his school: ‘When it was announced that schools were closing it was a relief to hear that we could continue our weekly sessions. The fact that it’s been so flexible and easy to use has been an amazing support this year.’

In 2020 alone, 803 tutors have delivered 148,094 sessions to 19,066 pupils through Third Space Learning. As Maths Leader Jennifer Chaudhuri puts it, ‘The children are accessing their lessons from home and I feel it brings them a little 'normal' in their everyday lives. They have all said they enjoy it! So thanks from Westfield Primary School for carrying on!'

It’s amazing to see the difference businesses like these can make, especially in such difficult conditions. We’d love to hear from you. Where have you seen the most impact made over the last year?