🌎💛 Find the best jobs in sustainability, social impact and more at Jobs for Good >

What is Tech for Good?

As part of our rebrand, we recently announced that we’ll be putting all our energy into scaling Tech for Good startups.  You can read more about that transition here . But what exactly is Tech for Good, and why should everyone care about it as much as we do?

The team at Tech Nation have a straightforward definition of Tech for Good , stating that it’s a term ‘used to describe a tech company with a focus on social im pact.’ All makes sense so far.

In order to fully understand Tech for Good, we need to pinpoint where the term has come from, and why it’s become so popular. While technology has historically symbolised innovation,  in many cases it’s become a dangerous and powerful tool in the eyes of the  public.

It doesn’t help that the majority of the wealthiest, and therefore most powerful, tech companies are based on a ‘ tech for profit’ model. Rather than harnessing tech to enhance people’s lives or help solve a social issue, the sole purpose of these companies is to  turn a profit. They simply use tech as a method to hook people into using their services. Take gambling apps as an example, every aspect of their product is designed to encourage people to spend more money without much (or any) hope of a  return.

This erosion of public trust is amplified by heavy media coverage, which has “gradually shifted [in tone] over the years” to become more negative. The rise of  AI, social media that knows more about you than you do, and mammoth data leaks have continued to fan these flames, leaving some of the biggest tech companies with questionable reputations.

So, we have Tech for Good and tech for profit, but is it really as clear-cut as that?  The definition we like best comes from Tech for Good Global , who state that ‘Tech is neither good, nor bad and definitely not neutral. Which is why we need to be intentional about the use of tech in tackling the world's pressing social and environmental challenges.’   When it comes down to it, technology really is just a tool. It’s the people wielding it that make the choices that define whether a company falls into the Tech for Good space, or not.

The history of Tech for Good

According to Tech Nation , the first record of a tech for social good firm was in 1989 with The Community Network. They provided an extensive telephone network to serve isolated pensioners in partnership with BT.  However, the phrase ‘Tech for Good’ was first popularised in the UK by Paul Miller, formerly of Social Innovation Camps and now CEO at  Bethnal Green Ventures. As Tech Nation put it, ‘It began in the noughties days of hack weekends when web developers who cared came together with third and public sector folk to hack a solution to a social problem during 48 hours of pizza fuelled  tech creativity.’

Why is Tech for Good so important now?

As we discussed in our previous blog post , many people have had more time on their hands to reflect on their current position and whether it aligns with their values and motivations.  A recent report has shown that the top three values we share across cultures are family, relationships and financial security. All  understandable, of course. But what’s really interesting are the following three values: belonging, community and personal growth. 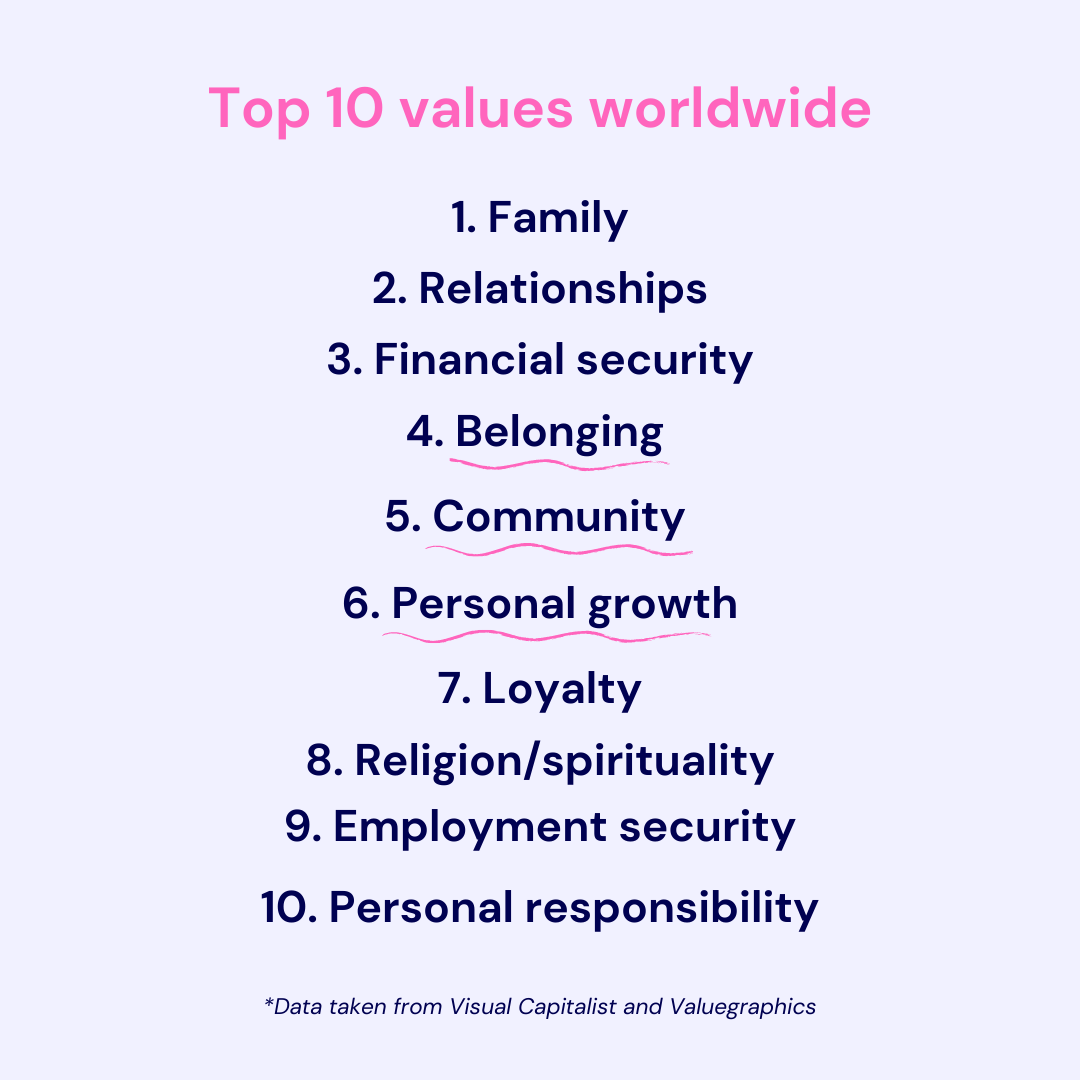 A sense of community and belonging to something have become more important than ever to people across the globe. We’ve seen similar trends echo ed in the recruitment space, with both candidates and employers focusing on mission and value alignment over everything else. This could help explain the meteoric rise of Tech for Good startups across the UK and beyond.

Tech Nation’s figures show that there are currently 490 Tech for Good firms  operating across a range of sectors in the UK. Since 2014,  the number of yearly incorporations in the tech for social good space has grown exponentially. The majority of these businesses are still fairly young, with 45% at Seed stage. 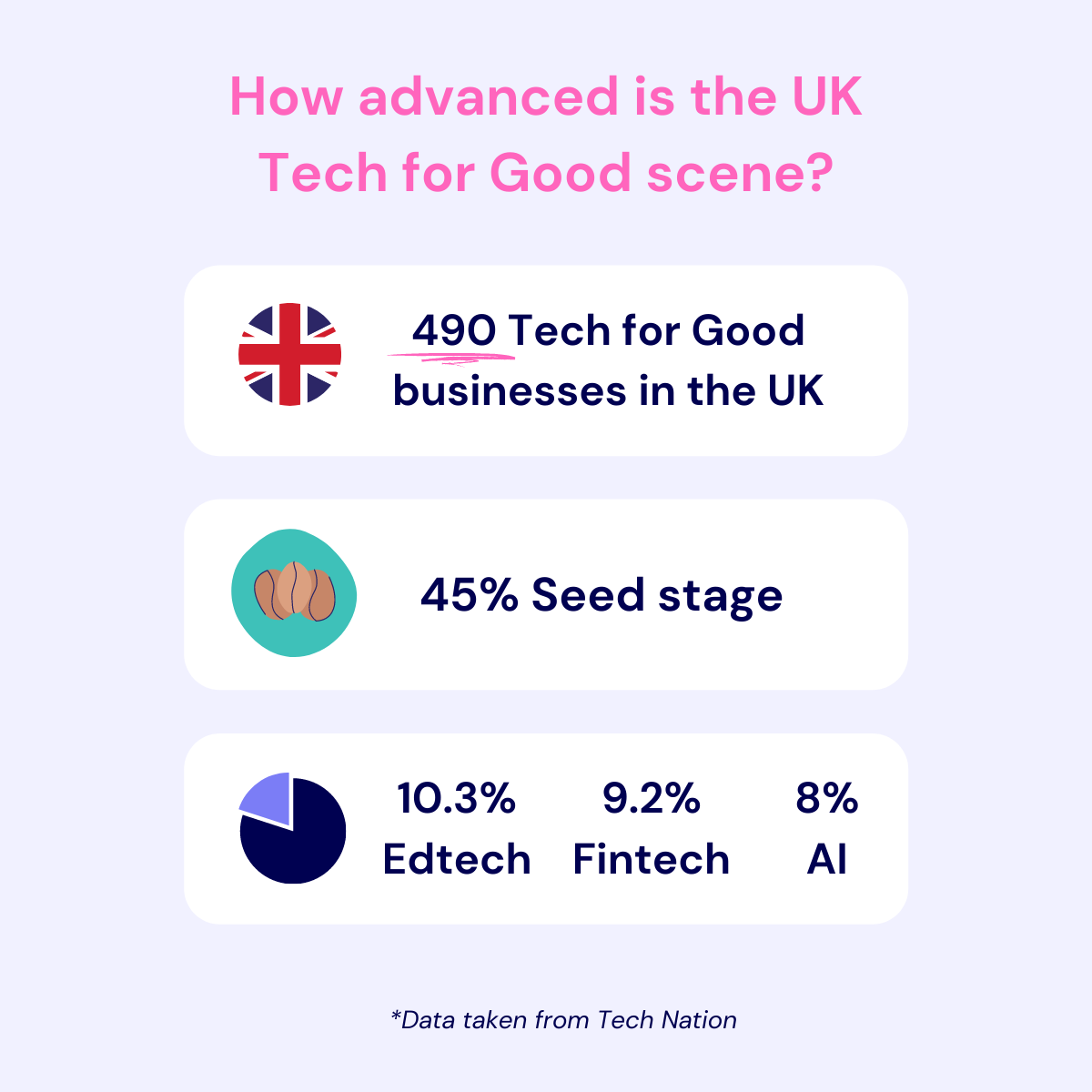 10.3% of these Tech for Good businesses sit in the Edtech space, with 9.2% in Fintech and 8% in Artificial Intelligence. Overall, these 490 companies are estimated to be valued at a combined total of £2.3b, with a turnover of £732m. Not bad at all for businesses that are led by purpose over profit.

An appetite for investment 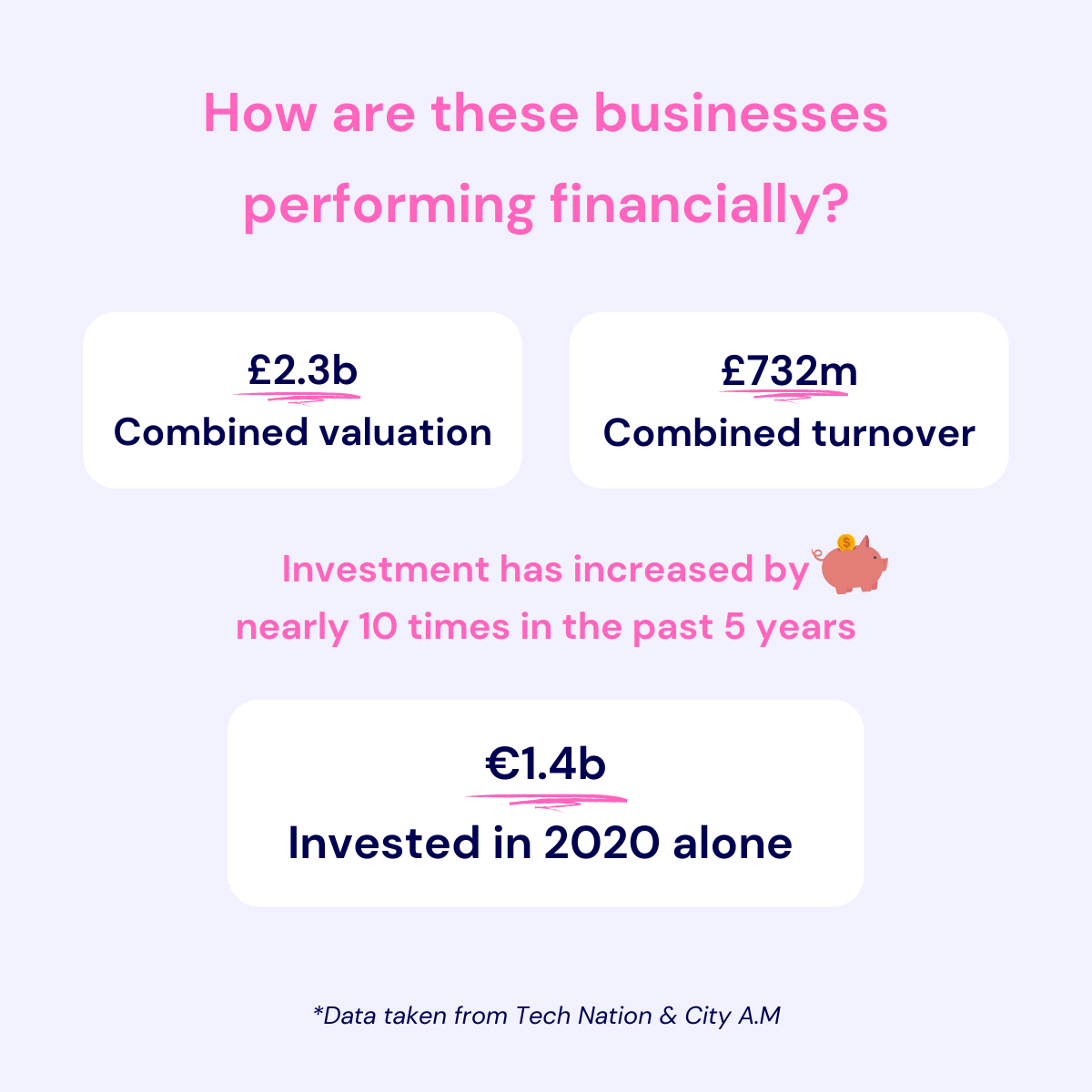 There are a range of  VCs, accelerators and incubators sp ecialising exclusively in this space, such as Bethnal Green Ventures , Big Society Capital and  Sustainable Ventures. It’s also been a great year for Innovate UK grant funding, with cleantech emerging as a focus area .

Who’s behind these startups?

So, there’s clearly a demand for these startups, but who are the people running the show? As to be expected, the bulk of employment is focussed in small companies. This should change as these startups grow and become scaleups, with many needing help sourcing the right talent in resource-poor conditions. 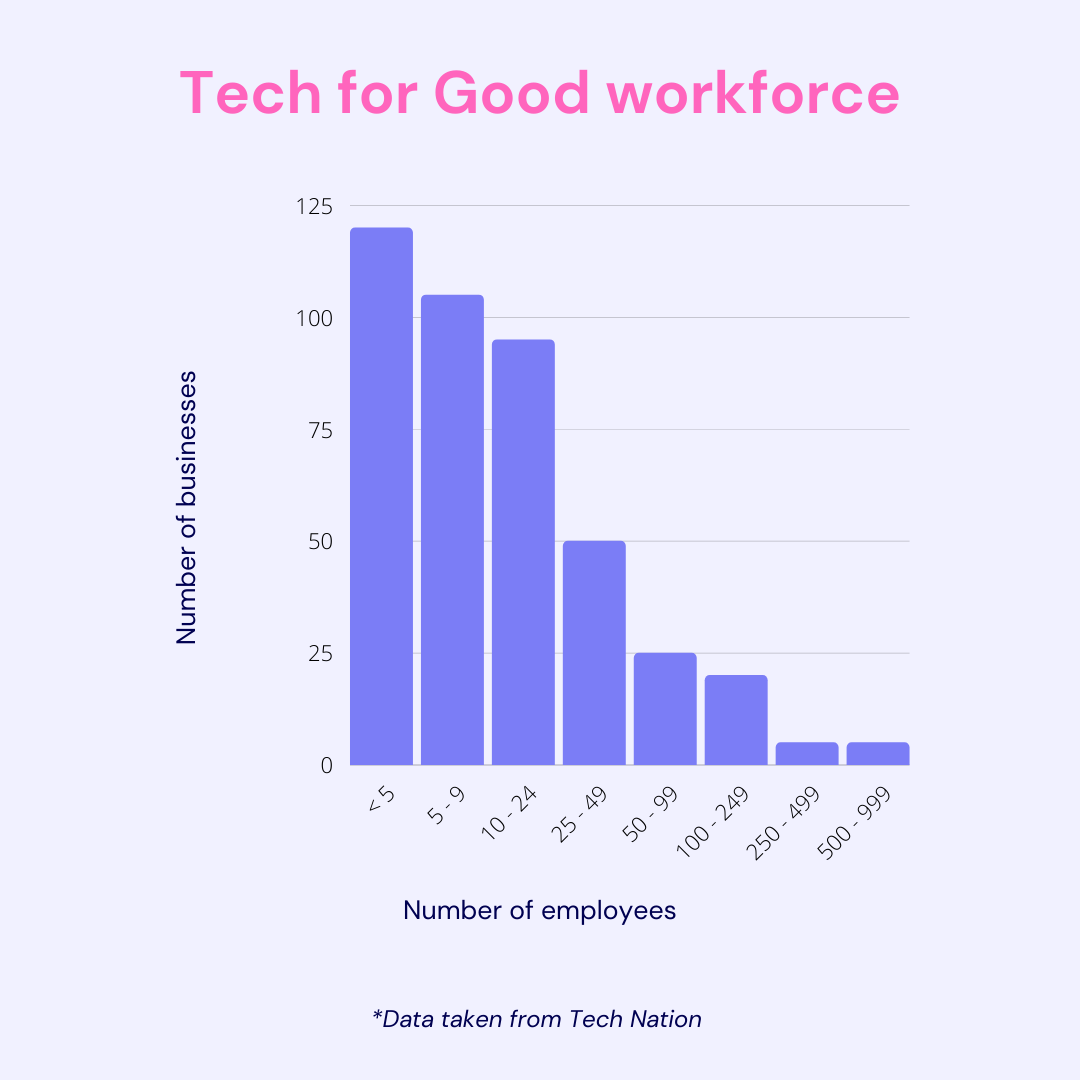 We want to help increase the diversity and inclusion across every startup we partner with, so it’s good to hear that ‘Black, Asian and Minority Ethnic' (BAME) workers account for 15% of digital tech workers’ in the Tech for Good space. This is significantly higher than the 10% across all UK  jobs. 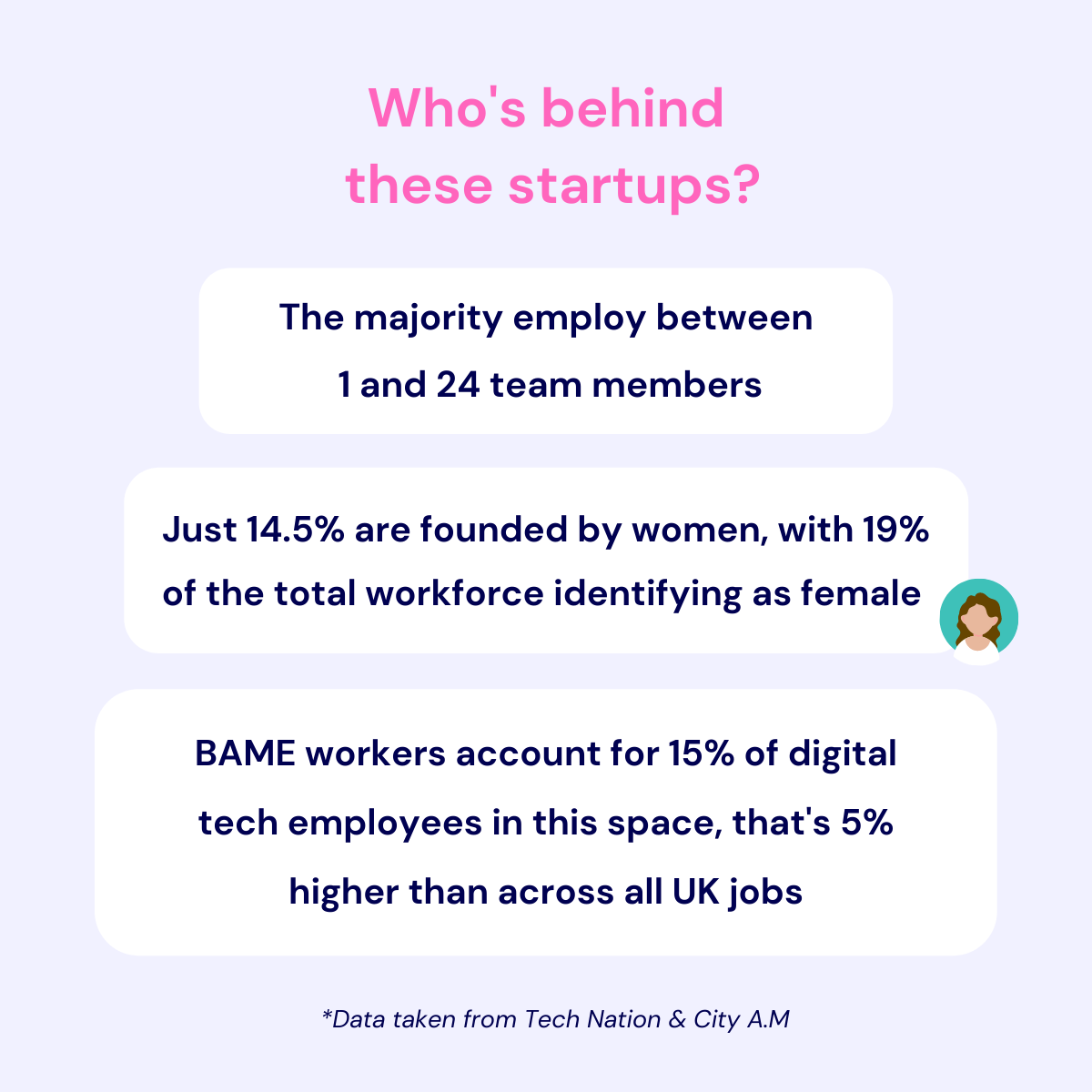 But there’s still more work to be done. While Ethnic diversity is above UK average, it’s still not representative of the UK population. Gender diversity is significantly lower in tech, which is  something we’ve discussed in  detail on our  blog. Tech Nation sum up the opportunity nicely, saying ‘This reminds us of the importance of taking a nuanced approach to understanding workforce composition, and the need for action.’

What more can we do to support the Tech for Good movement?

At Confido, we love businesses that have a clearly defined purpose, but more importantly a product that’s bringing about positive social change. There are so many startups across the UK and beyond that are making a huge i mpact on people’s day to day lives. Here are some examples to give you a snapshot of the effect these startups are having:

What they do: Olio connects people with their neighbours to share unwanted food  and reduce wastage.

Their impact so far: 6m portions of food have been shared instead of being thrown away, thanks to 2m users.

What they do: Beam is a crowdfunding platform built to support homeless people through training and into stable, paid work.

Their impact so far: Beam have helped raise over £1.3m which has enabled  160 homeless people to successfully start new career paths.

What they do: Unmind is a workplace mental health platform that  empowers employees to measure, understand, and improve their mental wellbeing.

Their impact so far: The team have helped some of the world’s leading organisations , like the NHS, Asos and John Lewis build mentally healthier workplaces.

But how can we help support these businesses so they can reach their full potential? Here are some  quick wins:

If you’re a Tech for Good Startup looking to make a critical hire, build a core team or scale up squads, we’re here for you. Equally, if you want to work for a company building products that make the world a better place, we’d love to hear from you.

Do get in touch at  contact@confidotalent.com, or say hello on LinkedIn  or Twitter.